What Is An Adinkra Symbol?

The Adinkra symbols are one of the ancient philosophical wonders of the Akan people of Ghana. Aside from their magnificent design concepts, they are also latent with unparalleled philosophical thoughts. These African symbols possess an embellished function with various symbolic representations of ethics, morality, advice, concepts and ideas Approximately 400 such symbols are known in Ghana. Many of these symbols share a common basic form and slight variations in representation may entail a change in meaning.

While Adinkra symbols have been adapted to be used in everyday life on all kinds of objects, they were used in considerably more limited and reverent ways as ceremonial clothing pieces. Traditionally, Ashanti royalty, spiritual leaders, and other elites wore Adinkra cloth to special occasions, including to funerals as a way to honor the deceased. The Adinkra cloth chosen to be worn to funerals could represent traits the deceased had, evoke sentiments and messages to the deceased, or both. Only spiritual leaders and royals were able to enjoy this luxury, where a special process was used to handcraft these one-of-a-kind cloths. 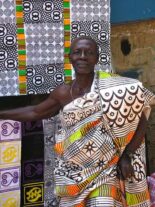 Traditional Adinkra cloths and clothing are stamped with carved calabash (a type of gourd common to Ghana) stamps using a dye made from the badie tree.

The Adinkra symbols exemplify non-verbal communicative as well as aesthetic values, including the different aspects of life of individuals who designed these symbols.
The vivid colors such as red, white, blue, yellow, etc are used for projecting the celebratory nature of the day. The dark and dull colors such as black, brick red, brown, etc are used for making ‘Birisi,’ ‘Kuntunkuni,’ and ‘kobene’ clothes. Black color induces aesthetic feelings of sadness as well as hopelessness.
The red color is used for denoting blood as well as death. This is the reason why Kobene is worn by the close family members to portray their grief while others wore different colored clothes. Kobene is also worn during the Asantehene’s funeral or during national calamities.

Below are the meanings of Adinkra symbols that you may find PRINTED on Kente Cloths and many objects throughout Ghana, however these portray a quite different meaning from what the Kente Cloth WEAVE PATERNS symbolizes.

Great Zimbabwe: Of Design and Patterns | The Sovereign State

A youth advocacy organization who's inspired by the sentiments, “representation matters,” and committed to promoting self-esteem, culture, education, and the latest online learning tools, in often overlooked communities; The GoldMind Foundation will engage our youth with fun learning activities and edutainment, plus projects and contests that will feature and represent them positively and encourage them to feel proudly connected to each other in the global family and world history.